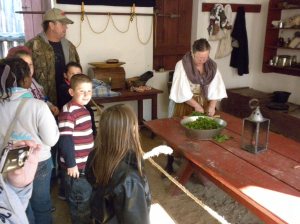 Washing and chopping fresh greens from the fort’s garden

It is difficult to prepare a period meal while speaking with somewhere around 12,000 students over the course of three days, however, I managed it quite successfully in early November.  That three days was then followed up with two days speaking with the general public on the virtues of 18th century foods.

I’ve been fortunate enough to have garden space to plant a variety of heirloom greens and prepared several during the week including curled leaf mustard, red-leaf mustard, beet greens, collards, and amaranth.

I was not impressed with the amaranth.  Unless you enjoy strong flavored greens it should be parboiled 2 or 3 times before putting to simmer with seasonings.  It reseeds itself with gusto so even if the flavor had been better my intent was to pull it up before it went to seed.  As it turned out, I pulled it up after harvesting the young tops.

I mixed the beet greens with the curled-leaf mustard and found them to be tender and very flavorful.  My intent is to plant beets this coming spring and try harvesting the tops while allowing the roots to continue to grow.

The red-leaf mustard produced a large leaf but it was tender and crisp and I found it pleasing enough that I will plant it again.  The flavor was good and the color, while not as red after cooking, was interesting.

The lovage never came up.  Out of five packs of seed I didn’t get a single plant.  Obviously the seed were not productive.  I’ll retry that in the spring as well.

The collards were young, tender, and in their prime.  Seasoned with salt pork and ham hocks, pepper and salt they were much appreciated.

While I’m a long way from a master gardener, growing these greens affords me the opportunity to have them fresh and tender and to give them an honest evaluation for the book I’m writing.