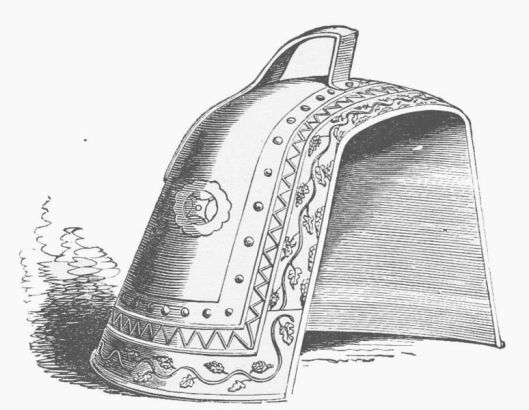 couvre-feu, device for covering a fire

Fire was necessary for preparing meals, and in the days before matches were readily available having fire to cook with meant preserving the fire so that it never, or at least rarely, went out.

The first fireplaces were merely holes in the center of the floor where a fire was built out in the open.  The smoke rose and, as best it could, exited through the roof which was usually thatch.  I find it fascinating that while my Scottish ancestors were building fires in this manner in the old country, my Native American ancestors were doing the same in North America.  Some technologies are so basic they evolve simultaneously between different cultures.

The second evolution in fire building was to move the fire up against a wall.  There was sometimes an overhang which helped catch some of the smoke and allow it to exit through a hole in the roof.  After several evolutions the fireplace as we know it emerged from that first central fire.

If there were any large burning logs they were pulled off to the sides and allowed to go out at night.  The hot coals that remained were raked up into a pile at the back of the fireplace, and a cover was placed over them.

The cover allowed just enough air to get in around it to keep the coals slowly smoldering throughout the night so that come morning a bit of dry wood could be put on and the fire would quickly roar to life ready for the day’s meals to be prepared.

The cover was called by several names, a carre-feu, curre-feu (“cover the fire”), or later a couvre-feu, ignitegium or peritegium.  The word was later simply curfew.  The bells which signaled residents to cover their fires and prepare for bed was the curfew bell.

Some hated the laws that governed the times the curfew bells were rung claiming they were put into effect to keep groups from gathering after dark.

I see the law, as did most of the 19th century writers, as primarily a preventative measure in the days when whole cities could burn down from stray sparks going up and out of the chimney and igniting a wooden roof.  In villages where all the structures were wooden; and dry wood at that, if one house caught fire an entire village or section of a village often burned before it could be contained.  By ordering the fires covered at the hour most inhabitants went to bed all could sleep soundly without worry of being burned in their beds before morning.

The hour the bell was rung was usually eight or nine o’clock in the evening.

Such practice was documented to the time of William the Conqueror about 1068, and similar customs were observed simultaneously in France, Italy, Spain, Scotland and probably all or most of Europe.

The covers were used in Colonial America.  Having hot coals in the morning with which to build the morning fire can only be appreciated by those who have had to arise on a cold morning and fumble around with building a fire when the fingers are so cold they will barely hold the materials.  The utensil was appreciated by those who used it for keeping coals hot during the night without using expensive fuel.

It should be noted that everyone probably banked their fire at night.  Those without utensils to cover it simply raked ashes over the hot coals to seal out the air and keep the coals hot till morning.

The British Archaeological Association described one made of copper that was riveted together, solder being liable to melt.  It was 10 inches high, sixteen inches wide, and nine inches deep.  They also described one of earthenware with brown glazing on it housed in the Boulogne Museum.

That association pointed out that in some English books on antiquities the curfew had been erroneously described in saying its purpose was to quickly extinguish a fire when in fact it was the very opposite.  They described the utensils as being extremely rare in England by the 1820’s, many of England’s buildings being brick by that time which were much less likely to catch fire.

In France, however, a traveler wrote in 1890 a published account of his trip through France of hearing a bell ringing and when he inquired as to its purpose was told it was the curfew bell, signifying that in some parts of Europe the custom continued long after it had ended in England.

In America, the custom of ringing the bell continued long after households stopped using the utensil to cover their fire.  Since the bell was rung at the same time every day, those who could not afford time pieces knew the time when they heard the bell ring.

With the ringing of the curfew bell-

And put out the light

Toil comes with the morning

And rest with the night.