As I said in an earlier post, I am planning a cozy 18th century Christmas dinner, the crown jewel of which will be a golden brown roasted goose served along with the blancmange from an article posted last week.   The following poem is a great lead-in for a post on roasted goose.

Is a thing of beauty as well as use;

As Cook well knows, who has the taste,

While he the spit keeps turning,

Above the faggots* burning,

That will soon will produce

As well in the country as in the town,

When researching a period food I like to document its use as early as I can.  In the case of roast goose, that may be a notation that Abrahams made in a footnote, “Roast goose is named as a dainty as early as the Targum Sheni to Esther”, [Biblical era] followed by Immanuel of Rome’s consideration that Jews were particularly fond of goose in 16th century Germany.  (2) 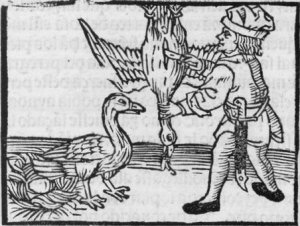 The ideal age of the goose so that the meat should be tender and flavorful was four months, when it was known as a green goose.

Early receipts instruct the cook make a stuffing with onion and sage, and, “Applesauce is indispensable with roast goose”.  Sage and onion remained the popular flavor for stuffing well into the 20th century.  (3)

An 1822 receipt for Forcemeat for Goose instructed the cook to chop very fine about two ounces of onion and an ounce of green sage to which add four ounces of bread crumbs, the yolk and white of an egg, a little salt and pepper, and if approved, a minced apple.  (4)

Goose Roasted.  A stubble goose** should be stuffed with sage and onions, chopped small, and mixed with pepper and salt; boil the sage and onion in a little water before they are chopped, or mix a few bread crumbs with them when chopped; either will render them less strong.  Put it first at a distance from the fire, and by degrees draw it nearer.  A slip of paper should be skewered on the breast bone [to keep it from overcooking].  Baste it very well.  When the breast is rising, take off the paper, and be careful to serve it before the breast falls, it will be spoiled by coming to table flattened.  Serve it with good gravy and apple sauce, in boats.  It will take about an hour and a half to roast.

That book contained a large number of ways of making goose including the following for Goose (Green) Roasted.

After a green goose has been well trussed and singed, put into the inside a good bit of butter, mixed with pepper and salt; put it to roast, and baste it frequently with butter.  When done, shake over it some flour and salt, when ready, take out the skewers, lay it on the dish with good gravy under it, and green sauce in a boat; it will take three quarters of an hour to roast.

In 1902, Annie Gregory published a receipt for what she called dressing, that good old Southern word for yummy goodness, which she made with roast goose.  “The dressing should be made of three pints of bread-crumbs, six ounces of butter, a teaspoonful each of sage, black pepper and salt, and an onion chopped fine.”  The drippings were thickened with flour to make gravy.  (6)

Roasted Goose.  A goose should be roasted in the same manner as a turkey.  It is better to make the stuffing of mashed potatoes, seasoned with salt, pepper, sage, and onions, to the taste.  Apple sauce is good to serve with it.  Allow fifteen minutes to a pound, for a goslin[g]***, and twenty or more for an older one.  Goose should be cooked rare.  – Beecher, Catherine Esther.  (7)

An 1842 receipt begins with typical instructions for dressing the goose before it can be roasted, however, when your goose comes shrink wrapped from the grocery store these steps are worthy of mention only for their historical merit.  – Chambers, William.  Chambers’s Information for the People.  1842.  Edinburgh.

To Roast Goose.  Pick, draw****, and singe the goose.  Cut off its head and neck.  Take off the legs and wings at the first joint.  The portions of the legs and wings that are left are skewered to the sides.  Stuff with chopped sage and onion, and crumbs of bread, with pepper and salt.  The skin of the neck must be tied securely, to prevent the gravy from running out.  Paper the breast for a short time.  A goose does not require so much basting as fowl or turkey, for it is naturally greasy.  It will require from two hours to two hours and a half in roasting.  It ought to be thoroughly done.  Serve with gravy sauce and apple sauce.  The liver, gizzard, head, neck, feet, and the pinions of the goose, form what is termed the giblets, and compose a good stew or pie.

Mrs.  Giger instructed removing the roasted goose to a hot plate before stirring a little flour into the pan drippings and adding water to make gravy.  It was still served with applesauce.  (8)

Roast goose wasn’t only eaten at Christmas.  It was the traditional food of Michaelmas, the Feast of St. Michael, the Archangel, on 29 September.   Legend says that those who eat roasted goose on Michaelmas will have money plenty the year round.  A goose killed at harvest time to be consumed for the feast of St. Michael was called a stubble goose because it was killed after the crops were harvested and only stubble was left in the ground.

An old legend says Queen Elizabeth I was eating roasted goose when she received the news of the defeat of the Spanish Armada.  Whether true or not, I think we see that roast goose has been the focal point of holiday dinners for many centuries, and it’s hard to get more traditional than that.  Another slice of goose please!  (9)

*  A faggot was a bundle of sticks used as fuel.  **  A goose for Michaelmas – one eaten at harvest time.  ***  A gosling was a young goose.  ****  To pick a goose is to remove its feathers.  To draw it is to disembowel it.   To singe it means to pass a piece of flaming paper over its skin to remove the bit of feathers that remain lodged in the skin.   Pinions are the tips (first joint) of the wings.

3.  Practical Housekeeper.  Cooking as it Should Be; a New Manual for the Kitchen and Dining Room.  1856.  Philadelphia.

7.  Miss Beecher’s Domestic Receipt Book:  Designed as a Supplement to her Treatise on Domestic Economy.  1848.  NY.