“Witch hazel is a shrub that everybody in New England, who goes into the woodland, knows by sight.  Its botanical term is Hamamelis Virginica, given it many years ago in honor of the early settlers of Virginia, who, before ascertaining the medical worth of the leaves and bark, used the twigs with success as divining rods”.  Witch hazel was described as growing from eight to fifteen feet by the age of five or six years.   It was not to be confused with a much shorter shrub (rarely more than five feet tall) by the name of hazel – the latter was the nut-bearing hazelnut.  The two are not related although witch hazel seeds/nuts are also edible. 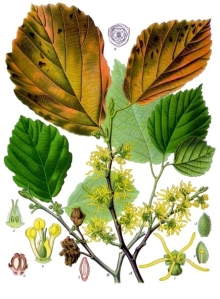 The plant goes by several other names including spotted alder, striped alder, tobacco-wood, winter-bloom, snapping-hazel, and, of course, Southern witch-hazel.

The latter was not thought to possess any of the qualities of the true witch hazel though that writer noted that unscrupulous gatherers of the witch-hazel leaves and bark did often try to pass of the one for the other.  “…the fraud is detected at once by the taste.  There is a similarity in appearance of the leaves and bark, but the flavor is almost as different as chalk from cheese.”

About November witch hazel trees have tiny yellow flowers emerge that expand throughout winter.  There are “nubbins”, one might refer to as nuts or seeds, which are interspersed amongst the blooms.

Witch hazel has a rather unusual way of dispersing its seed.   The seeds are kept over winter and ripen them the next fall when its flowers are expanding… “when the pod bursts open, snapping them several feet away.  If the branches are gathered before the seeds are scattered the pods will open in the house and throw their seeds across the room.”  Most sources noted seeds being flung 10 to 20 feet, but Gibson claimed he’d seen them thrown up to 45 feet away from the host shrub.  – Dowd, Mary Alice.  Our Common Wild Flowers at Springtime and Autumn.  1906.  Boston.

After an encounter with it William Hamilton Gibson said of witch hazel:  “I had been attracted by a bush which showed an unusual profusion of bloom and while standing close beside it in admiration I was suddenly stung on the cheek by some missile and the next instant shot in the eye by another, the mysterious marksman having apparently let go both barrels of his little gun directly in my face.  I soon discovered him, an army of them,–in fact a saucy legion, all grinning with open mouths and white teeth exposed and their double-barreled guns loaded to the muzzle ready to shoot whenever the whim should take them”.  – The Nature Study Review.  Nov. 1919.

“Medicinally, witch hazel is an astringent.  Both bark and leaves contain tannic acid in large quantities, but the greater percentage is in the bark.”  The bark was stripped off and distilled for its oil.  It was used for treating acute derangements of the stomach.  How often was it taken?  “People do not buy it by the four or eight-ounce bottle now, but by the quart or gallon, and every medicine chest is not properly equipped unless it has a liberal supply…”.  – Good Housekeeping.  Aug. 1894.

North American witch hazel was named for its resemblance to the English and Scottish Witch or Wych elm which produced a rather large, though seldom straight tree.  The Witch elm was used for bent-wood work, boat frames, etc.  The wych-elm or Eurasian elm Ulmus glabra, has large rough leaves, grows primarily in woodlands or near flowing water.   It has clusters of flowers and winged fruits.  The old English prefix wych, or witch meant “bend”)so named because the tree had pliant branches.

There are accounts of hazel and witch hazel being used for fishing rods or poles, and it is difficult to know from many accounts whether the writer meant the hazel [hazelnut], the witch hazel, or the wych-elm that was used in olden times in England.  While witch hazel is native to North America (with versions also native to Japan and China) it put in an appearance across the pond early on.

“Hamamelis virginiana was one of the first New World plants to be adopted for ornamental use by European horticulturists. As early as the mid-17th century, the plant was growing in private botanical collections in London. And it’s been a perennial favorite ever since.”  – The Brooklyn Botanic Garden website.  http://www.bbg.org/gardening/article/winsome_witch-hazel.

The Positive Medicine web site in the UK noted a collaborative effort between John Bartram  and an English gardener to distribute witch hazel in England.  Peter Collinson, an English cloth trader and avid gardener bought various plants and seeds from America and distributed them to English botanical gardens.

“The Father of Fishing, Izaac Walton, can be consulted for an account of making rods.  By Walton’s time  hazel as in hazelnut, witch hazel, and the wych elm for which the North American witch hazel is named were all growing in England.

An account of rod-making in England from April 22, 1870 may be of interest.  “I have been told, very good fly rods may be made of mountain ash, also of wych elm and of hazel…”.  – English Mechanic and Mirror of Science.

An American writer thought witch hazel wasn’t of much interest to the professional rod maker or fisherman, but that, “many a witch hazel fish-pole has augmented the truant boy’s strong of forbidden fruit down the creek bank in the first warm days of spring.  Down South where witch hazel is scarce and scrubby, its cousin, the famous red gum, is cut short in its career and lifts fish from the ‘Swanee’ river and other southern streams famous in song and story.”  – Hardwood Record.  June 10, 1917.

Another American wrote, “He had a witch-hazel pole which he had cut in the winter and from which he had scraped the bark, to make it look nice.  He kept it on the rafters of the woodshed…”.  Munn, Charles Clark.  Boyhood Days on the Farm:  A Story for Young and Old Boys.  1907.  Boston.

Because the forked branches were thought to possess magical powers of pointing to hidden streams or veins of metal [gold, silver, coal] they were used as divining rods by well diggers and would-be miners.  It was sometimes referred to as the witch of the woods because it bloomed out of cycle with most other plants and shrubs.

By the turn of the century infusions of witch hazel were being combined with alcohol to make an astringent lotion for external inflammations.  An advertisement in the Index of Diseases and Remedies claimed it was the best preparation for use in sprains, bruises, prevention of ecchymosis, leucorrhea, etc.  “It [miscible with water] may be used internally in the same doses as the fluid extract.”

Native Americans, “put great faith in it as a sedative and application to external hurts and inflammations.  They still the leaves and bark, and bathe sprained joints and muscles.  They apply it for all their burns, bruises, and aches.  It quickly takes out the smart and sting and allays the inflammation, lessening the swelling and restoring the hurt to a normal condition.  Likewise I have seen them use it for weak and sore eyes, sores in the ear, nose, throat, or mouth, and for sore throat too.  As a relief to the bites of insects most of us are familiar with it, while many of us have used it with good results for our lame backs and rheumatism…”.  The penner of those lines noted Indian women mixed it with oil and used it as a beauty product for the skin.  – Life and Health Magazine.  April 1912.

The following description may help interested parties to find the bush in the wild or to know when purchasing if they are indeed purchasing true witch hazel.  “The witch hazel leaf is nearly as broad as it is long, bluntly pointed at its tip, with a stem generally less than one-half inch in length.  The sides are unequal in size and shape and the edges are roughly scalloped.”.

Witch hazel tea may be purchased as can the dried leaves.  Leaves can be gathered from nature and stored away to make tea and poultices as needed.  It’s hard to beat a plant that can supply you with medicine, fishing poles, and winter blooms.  Blissful meals yall, – thehistoricfoodie©