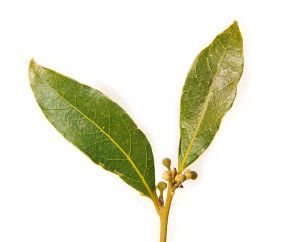 One of the first things I planted when we purchased our little farm was a bay tree.  It was a tiny little thing, but given time and love I don’t see having to purchase bay leaves again and fresh ones are always more flavorful than the dried ones.  Either way, always discard the bay leaf before serving the dish.

An added bonus with growing your own is having enough to use in potpourri or sachets.  Since I am more involved in cooking than in scenting and my tree isn’t large enough to pluck enough leaves for making sachets yet, let’s take a quick look at the use culinary uses of bay leaves in times past.

Clermont gave a list of sweet herbs for cooking in 1812 which will serve today’s cook equally as well. “What go under the denomination of sweet herbs in cookery, are parsley, chibbol [chives], garlick, rocambole [an allium similar to hardneck garlic], shallots, winter savory, fennel, thyme, laurel, or bay-leaf, and sweet basil. Under the name Ravigotte, or relishing herbs are, tarragon, chervil, burnet, garden cresses, civet, and green mustard; there are other sweet herbs, which are not called ravigotte, although they are often used together, as mint, borage, water-cress, rosemary, marigold, marjoram, &c.”

The ways in which the leaves were used was consistent through 18th and early 19th century cookbooks.  John Perkins instructed in 1808 using bay leaves in pickling and making mushroom ketchup, and cooking a pig, pigeons, fish, beef, eels, poultry, and mutton.

One of the less common uses was in custard found in Lady Charlotte Campbell Bury’s cookery book (1844).  “One quart of cream, twelve eggs, the whites of four, the rind of one lemon, boiled in the cream, with a small quantity of nutmeg and a bay-leaf, bitter and sweet almonds one ounce each, a little ratafia and orange-flower water; sweeten to your taste.  The cream must be quite cold before the eggs are added.  When mixed, it must just be made to boil, and then fill your cups.”  Ratafia in this instance most likely refers to a liqueur flavored with almonds or kernels from peaches, apricots, or cherries.  It also can mean an almond flavored cookie or macaroon.

John Nott.  “The Cooks and Confectioners Dictionary”.  1737.  Hare Pye.  Break the bones of the Hare, lard it well, and season it with salt, pepper, nutmeg, cloves, and a bay leaf; lay slices of bacon at the bottom of your pye, put in the hare and lay slices of bacon over it, and lid it up; when it is bak’d pour in melted Butter, and stop the hole of the pye, and set it to cool.

Note:  Today most people prefer to cook the meat and debone it before baking it in the pie.  Larding refers to inserting small slivers of fat into the meat to keep it from drying out as it cooks.

Clermont utilized fish in making soup and sauces. 1844. “Take what kind of fish you think proper…cut in slices, and put them into your stew-pan, with a little butter, sliced onions…parsley, thyme, bay-leaf, basil, a clove of garlick [sic], carrots, and parsneps [sic]; soak it until it forms a slight glaze on the bottom; add to it the former broth and boil on a slow fire for about an hour; sift [strain] it clear.  It will serve for soups and sauces”.

I especially love cooking instructions when they come from sources other than cookbooks.  This is just such a one.  Pickling the fish in spices and vinegar preserved it without refrigeration.   “When more fish is caught than can be made use of, or kept without being ‘spiled’ [spoiled], cut it into slices about an inch thick.  (Every mess should lay in supplies of whole pepper, dried bay’s leaf, and all-spice, or pimento…)!  Wipe the fish dry, and lay it in a large jar [or crock], as follows:  after having pounded all-spice, black pepper, and salt, and mixed it well together, and rubbed the fish well with the mixture, lay the slices in regular tiers; and between every tier a bay-leaf, and so on, ‘chock up’ to the top, pressing the whole pretty well, or ‘handsomely,’ and then pour the vinegar down by the side, not the middle of the jar, until the jar is quite full.  Cover it over with brown paper, if to be had, if not, a bit of old canvass; tie it close, hand it over to the cook for a quiet corner in the oven, and when done, lay it by to cool;–and there’s a supply that will keep till all’s blue again.”  – “Jack Tench:  or, The Midshipman Turned Idler”.  1841.

Cut a slice of beef from the round three inches thick, with very little fat; stew it in water and a glass of white wine, seasoned with salt, pepper, cloves, a bunch of sweet herbs, and a bay-leaf; let it boil till the liquor is almost consumed, and when it is cold serve it up; what liquor remains, strain it off and mix it with a little vinegar.

Those who may want to add bay to their herb garden should be able to find seedlings at a nursery or they can be started from cuttings.  They are also called sweet bay and bay laurel.  They are evergreen and flower in the spring.  They may be grown in full sun or partial shade and one might let the weather govern the location for planting.  Partial shade might be better where the norm is extremely hot summers.  The size of the mature tree can be controlled by planting it in a container or through pruning.  It is hardy to 23 degrees, but can withstand a little colder if planted in a sheltered location.

As always, I wish you Blissful Meals, especially as we approach Christmas with all its splendor.  God Bless and merry Christmas one and all.  ©The Historic Foodie

[Spelling is unchanged from the original sources.]

2 thoughts on “GROWING and Using YOUR OWN BAY LEAVES©”