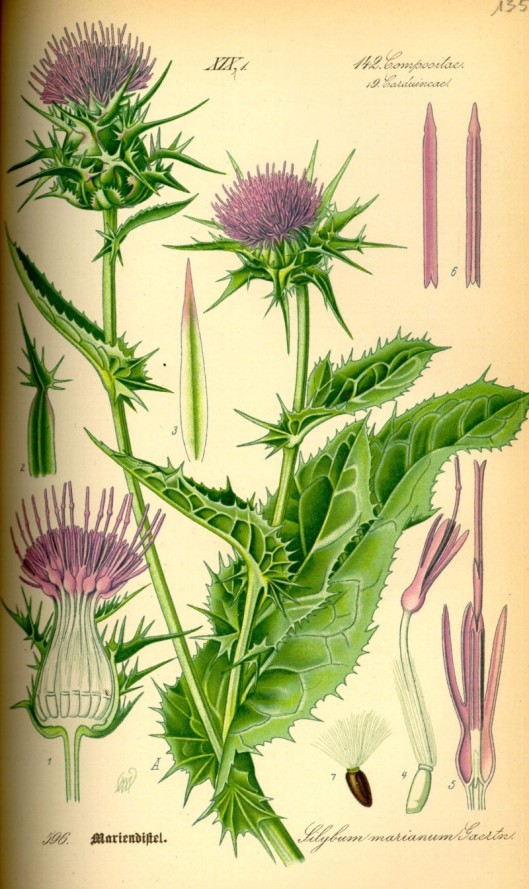 The title of this post came from “Blackwood’s Magazine” Feb. 1895.  “…the French public was browsing the thistles of the Vicomte d’Arlincourt, or of ‘Lord R’Hoone’ (otherwise Honoré de Balzac himself in his thistle-salad days)…”.  Yes, gentle reader, salads are made from peeled thistle stalks and they can be cooked as well.

This caught my eye as I’ve been slowly compiling an encyclopedia of the history of salads (cooked, raw, and everything in between) over the past few years and because there are thistles growing in our field.  To eradicate them, or to eat them, that is the question.

One needn’t worry about identifying a species of thistle before consuming it as all are said to be edible.  Although it may be too hot for them to flourish, I’ve purchased seed to add cardoon to my perennial garden and cardoon is simply a cultivated thistle grown for its celery-like stems rather than its flower head.  The plant is usually covered with hay to render the stems white and tender, and they are eaten just as wild thistles are in the references below.  Depending on what is available, either will work in the same manner and cardoon can be found in cans or jars in specialty food stores for those who prefer to skip the thorns and go straight to the dining room. 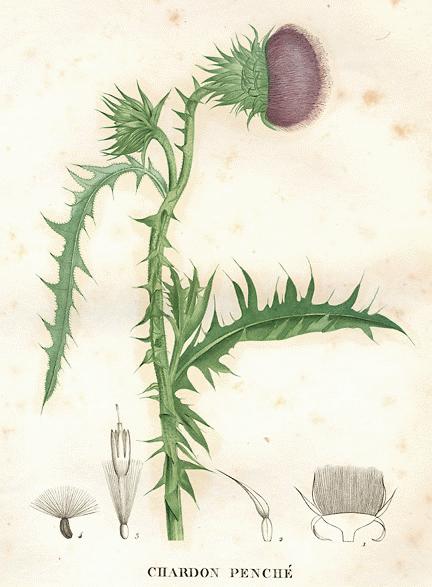 Historians date the cultivation of cardoon to the days of Pliny and some think modern artichokes then evolved from cardoon about the 15th century.

One might assume the eating of thistle stalks was learned from Native Americans, but given the accounts of them being eaten in England, Italy, Spain, Turkey, and other countries from at least the Middle Ages, proves the thistle is one of those basic resources that evolved simultaneously throughout much of the world.  “Nothing to eat, starving and weak; we followed the example of the squaw, in eating the inner portion of large thistle-stalks”.  – “Travels in the Far Northwest, 1839-1846”.

English cooks and 19th century cookbook writers point out that applying fresh lemon juice to the peeled stalks will prevent them from turning dark.  Acidulated water, the term often used, is water with lemon juice into which the pieces can be placed for this purpose.

“Both the milk thistle and the blessed thistle were used by our ancestors, the former as a vegetable and the latter as a tonic, and Evelyn, in his ‘Acetaria’ [1699], says that to a salad of thistle leaves ‘the late Morocco Ambassador and his retinue were very partial.’  The leaves of the milk thistle shorn of their prickles were not only an ordinary ingredient in a salad, but they were also boiled’, and Tryon says of them, ‘they are very wholesome and exceed all other greens in taste’.  They were added to pottages, baked in pies, like artichoke bottoms, and fried.  Culpepper advises one to ‘cut off the prickles, unless you have a mind to choke yourself’, but in olden days both the scales and the roots were eaten.  The young stalks, peeled, were eaten both fresh and boiled.”  Rohde, Eleanor.  “A Garden of Herbs”.  1922.

In 1828, John Loudon included thistle-stalks in a list of culinary vegetables from the open garden.  Were these the common thistle, or were they the more refined garden cardoon?  “An Encyclopaedia of Gardening”.

John Young was definitely eating wild thistles when he wrote in his memoirs in 1847, “For several months we had no bread, Beef, milk, pig-weeds, segoes [sego lilies], and thistles formed our diet.  I was the herd boy, and while out watching the stock, I used to eat thistle stalks until my stomach would be as full as a cow’s”.  – Young, John R.  “Memoirs of John R. Young, Utah Pioneer”.  1847.

“Good Housekeeping”, Oct. 1891, contained an article called Cajun Housekeeping”, in which the author said, “Tender thistle stalks she cooks as one would asparagus, and they are just as good-then no adverse fate ever cuts short the thistle crop”.  I suppose if my asparagus bed fails to thrive, I may depend upon its wild substitute to supply us with this favorite.

MILK THISTLE STALKS.  The young stalks about May being peeled and soaked in water to extract the bitterness, boiled or raw are a very wholesome sallet eaten with oyl, salt and pepper.  Boil them in water with a little salt till they are very soft and so let them dry to drain.  They are eaten with fresh butter melted not too thin and this a delicate and wholesome dish.  Other stalks of the same kind may be so treated as the Bur being tender and disarmed of its prickles.  – Evelyn, John.  “Acetaria”.  1699.

CARDOON SALAD.  1885.  Jules Harder removed the leaves from the stalks, cooked them, and then peeled them.  “Then cut them in scallops an inch long and drain them on a napkin.  Put them in a salad bowl and season them with salt and pepper.  Then chop two cloves of garlic very fine and put them in a frying pan with a little sweet oil.  Fry them [garlic] lightly (not letting them get brown), and add immediately some bell peppers chopped fine, and some vinegar.  Then let them boil up for two minutes and pour the dressing over the Cardoons, mixing them well together, and then serve.”  – “The Physiology of Taste”.

The salad made of cardoons is rather unusual.  These French thistles should be drained from the can and allowed to marinate for half hour in French dressing to which a little onion juice has been added.  Drain, add good mayonnaise, and lay on white lettuce leaves garnished with the sweet pickled cucumber rings that come in bottles for the purpose.  Toasted whole wheat crackers with melted cheese on them go nicely with this salad.  This will serve four people.