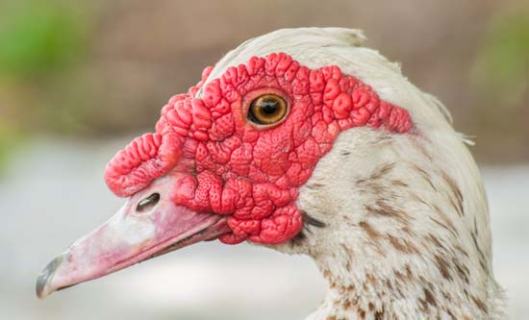 The case of the Muscovy water fowl of South America is not the first time I’ve looked at archaeology books for a look at poultry origins although they might seem an odd place to look.  Sometimes one of the best records comes from these sources.  Silverman and Isbell noted they were kept by natives in South and Central America prior to Columbus’ second voyage in 1494 and Roberts likewise documented them through Diego Alvarez Chanca in 1494.  [The latter was a Spanish physician and companion of Christopher Columbus.]  By 1555 they were documented in Europe and, “in the lesser Antilles, along the Caribbean shores of South America, and into Honduras and Mexico”.  They attribute the culture of the Muscovy to the Aztecs.

In 1891, H. S. Babcock wrote in “American Agriculturist” that Muscovies were rarely seen in New England and the Northern states, but were kept in larger percentages the farther South one traveled.  There he said the Pekins, Cayugas, and Rouens common in the North were much fewer in number while Southern farms with Muscovies were plentiful. 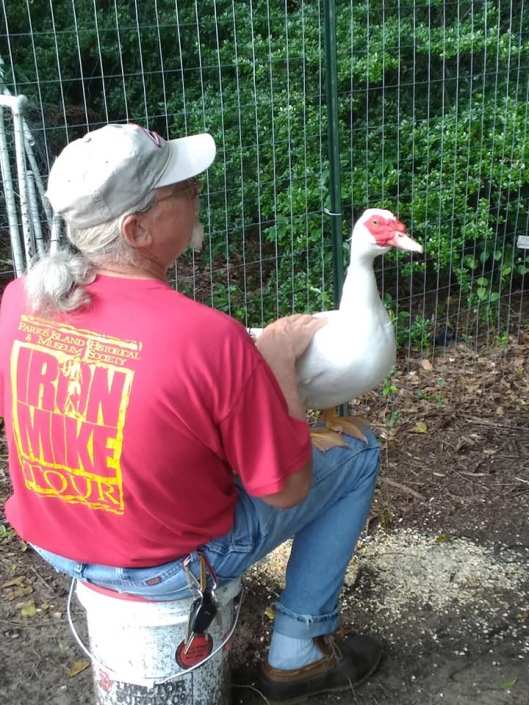 Martin Brady with Ralph.  Ralph and his mate Alice are our first pair of Muscovies.

In 1810, “A Treatise on the Breeding, Rearing, and Fattening of Poultry” was translated from French to English where a passage notes that the Muscovy, “stocks the farm-yards of our colonies; it has long been brought into ours [in France], where it proves profitable. . . “.  France held an enormous amount of land during this time and the book did not specify whether the colonies in question were in America, Canada, or elsewhere.  The fact that the author did not specify; however, tends to infer the statement was aimed at the whole of the French colonies.

It is a distinct species from all known varieties of duck, therefore, not actually a duck at all.  As with the mule, any progeny of a Muscovy and a duck is sterile.  Early European breeders did sometimes encourage the mating of Muscovies and common ducks because the young matured quicker and made it to the table with less expense in feed.  Unlike ducks, the female Muscovy usually weighs in at about half the weight of the male and the tail feathers of the Muscovy drake do not have the signature curl of ducks.

Muscovy hens will build nests on the ground or in tree branches and both male and female are capable of flight.  English poultry author, Lewis Wright, was quoted describing the Muscovy as having a fowl temperament, however, this author has found her Muscovies to be rather more gentle than many of her Pekins and Rouens.  Mr. Babcock said in his article he found them to be quite the opposite as well.

Female Muscovies are known to be good sitters and have been used as incubators of chicken, duck and turkey eggs in France, Australia, and other countries, Australians reporting better hatch rates under Muscovy hens than under chickens or in mechanical incubators.  Muscovy eggs take 35 days to hatch.  When hens are about to sit they line their nests with feathers and down which they use to cover their eggs when they leave the nest to feed.  Your author’s biggest challenge in raising chicks of any sort is protecting the chicks from fire ants.

All primary sources consulted echo the sentiment that the Muscovy is a prolific breeder, and a voracious eater, but because it forages well and is not particular what it consumes it was considered profitable to rear.  It was agreed the Muscovy was found in the wild only in South America and in early sources was commonly called the Barbary or Guinea-duck.  Another commonality is that the Muscovy can have a strong musky smell from glands near its rump and it was advised to remove that area and the head as soon as the bird is killed, as opposed to the historical practice of allowing poultry to hang to age.  “It is then a very good dish, and as succulent as the wild duck”.