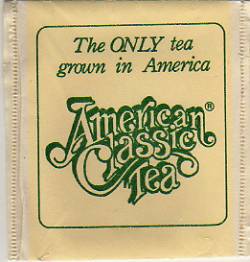 Outsourcing jobs is one of the main reasons many Americans have lost faith in their government and why thousands of people who want, and are qualified for, employment can find only part-time employment with no benefits. With the loss of tax cuts and lack of raises many who are employed full-time are actually making less than they were a few years ago. I applaud efforts being made to provide jobs for Americans and boost the American economy so I’d like to share an American product.

A friend gave me a box of American Classic Tea’s Charleston Breakfast tea and I did some research on the company and the process whereby the tea is grown, harvested, and sold. Frankly, I’m pretty impressed.

The plantation is currently owned by the R. C. Bigelow Co. of Fairfield, CT, founded by Ruth Bigelow in the late 40’s, and employs some 350 people in blending tea. Bigelow sells many varieties, but the American Classic Tea is the only American-grown tea. 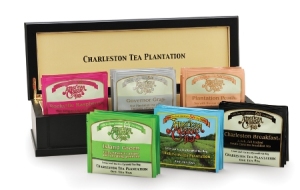 The Camellia sinensis plant is said to have been introduced to the U.S. by the French botanist, Francois Andre Michaux in 1799 when he presented plants to Henry Middleton of Charleston. The tea was planted in the garden at Middleton’s plantation where growing conditions seem to be just what the doctor ordered.

There are currently 127 acres of tea plants which are processed on-site producing six flavors: American Classic, Charleston Breakfast, Governor Grey, Plantation Peach, Rockville Raspberry, and Island Green Tea. American Classic Tea has been the “official” tea of the White House since 1987. The first families and their guests can support American-grown tea, but they can’t seem to extend that appreciation for, “Made in America”, much beyond that.

Still, it’s pretty impressive to know something like tea is growing on American soil and that it has found its way into stores in 17 different states. Perhaps, like Carolina Gold rice, it will find a ready market among foodies who appreciate high quality products and support the concept of American jobs for Americans.

Blissful Meals, yall, try the American Classic Tea and if you’re in the area, take a tour of the site and learn about how the tea is grown and processed.