This article is for my son, Josh, whose main interest in life is fishing bass tournaments.  A while back I posted an article on cooking catfish in the 18th century, so it is only fair I give this long-time favorite a worthy mention.

Long before casting reels and “catch and release” Native Americans were catching bass and eating them.  The famous Naturalist, William Bartram, penned an account published in 1791 of the Natives in the South catching largemouth bass by bobbing hooks from a long pole.

The experience of watching Native Americans bob fishing, or dapping, from a canoe for bass occurred in 1760, 31 years before Bartram’s book was published.  Most agree that the fish he erroneously called a trout was in fact a bass.

Cook Book with recipe for Boiled Bass and Fried Bass

Two people are in a little canoe, one sitting in the stern to steer, and the other near the bow, having a rod ten or twelve feet in length, to one end of which is tied a string line, about twenty inches in length, to which is fastened three large hooks, back to back. These are fixed very securely, and tied with the white hair of a deer’s tail, shreds of a red garter, and some parti-colored feathers, all which form a tuft or tassel nearly as large as one’s fist, and entirely cover and conceal the hooks; that are called a “bob.” The steersman paddles softly, and proceeds slowly along shore; he now ingeniously swings the bob backwards and forwards, just above the surface and sometimes tips the water with it, when the unfortunate cheated trout [sic] instantly springs from under the reeds and seizes the exposed prey.

Natives were no doubt eating bass and other fish well before Bartram’s experience.  Soon after arriving in the New World Europeans followed their example and bass and other fish took their rightful place on their tables.  A book on the early settlers of Massachusetts has an account of explorers passing wigwams and a house where a man sat eating boiled bass with no bread.  The travelers partook of the bass and then resumed their travels [1630].  – Young, Alexander.  Chronicles of the First Planters, or, The Colony of Massachusetts Bay 1623 to 1636.  1846.  Boston.

Another 17th century account of eating bass may be one of the earliest receipts for making it.

Their homony consisted of corn broken in a mortar and boiled.  Their samp was whole corn hulled by scalding water, a little impregnated with lie.  Their nokehike was corn parched and pounded.  Suckatash was composed of corn in the milk, [fresh corn, not dried] and green beans – a very palatable dish.  The broth of a boiled bass-head, thickened with homony, was called upaquontop.  – Williamson, William.  History of the State of Maine:  From its First Discovery, A.D. 1602 to the Separation, A.D. 1820, Inclusive.  1832.  Hallowel. 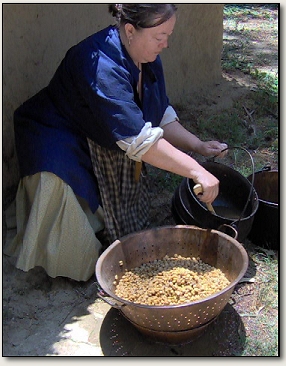 TheHistoricFoodie making hominy in the Creek village at Ft. Toulouse

In Providence, RI, in 1836, a recreation of an Indian banquet was staged to celebrate 200 years of settlement.  The following account is much the same as the previous one as to how the fish was eaten.

An Indian mat being spread out, a large wooden platter well filled with boiled bass graced the centre, supported on one side by a wooden dish of parched corn, and on the other by a similar one of succotash.  – Stone’s Life of Howland, p. 262, quoted in John Russell Bartlett’s A Glossary of Words and Phrases Usually Regarded as Peculiar to the United States.  1859.  Boston.

A cookbook published in 1840 told the cook to season the bass with salt and pepper, stuff it with bread, one egg, marjoram and parsley, minced fine, with salt pork and four ounces of butter, bake an hour, and when done pour over it melted butter; served with stewed oysters.

That book also contained a receipt for Pickled Bass, similar to today’s ceviche.  Boil sea-bass till done, lay in a dish, put some allspice and pepper into some vinegar, let it come to the boil, and pour over the fish.  To be eaten cold.  – Economical Cookery.  1840.  Newark, NJ.

In 1842, a dinner prepared for Charles Dickens at the City Hotel in New York included Boiled Bass with caper sauce on the Bill of Fare. – Delmonico’s:  A Century of Splendor.  1858.  NY.

In Marion Harland’s book, the cook was instructed to fry bass to a light golden brown in a mixture of half butter and half lard taking care not to over-cook it.  “The fashion affected by some cooks of drying fried fish to a crust is abominable.  Fried bass are a most acceptable breakfast dish”.  – Common Sense in the Household:  A Manual of Practical Housewifery.  1871.  NY.

Other writers agreed with the merits of fried bass for breakfast because it turns up quite often.

Isaac Homans thought the “upper classes” may not have eaten fish as often as they should and considered fish to be lighter of digestion and healthier than meat.  “…they might enjoy, at least more often, real luxury in a dish of common broiled cod-fish and potatoes, a broiled mackerel, a fried bass, or a smoked herring.”  – Hunt’s Merchants’ Magazine and Commercial Review.  1852.  NY.

Olive Green outdid herself with the number of ways she offered for preparing bass – a whopping 45 receipts!  It was fried whole, fried in fillets, stuffed, stewed, broiled, baked, &c., and served with bacon and a number of sauces.  – Green, Olive.  How to Cook Fish.  1908.  NY & London.

The receipt that turns up most often in cookery books prior to the 1920’s is Fried Bass with Bacon.  About the only thing that varies from one book to another is the quantity of bacon served up with the fish.  Oscar of the Waldorf was among those who thought one slice of bacon per fish made a simple but nice presentation while others offered several rashers of crispy bacon.

Wash, scale, and carefully clean the bass, season well with pepper and salt, roll them in flour and let them lie in it until ready to be cooked, then drop into a pan of very hot lard and fry until nicely browned.  Then fry in a separate pan four slices of streaky bacon; one piece for each piece of the fish and lay the slices of bacon one on each piece of fish.  Garnish with parsley and serve with mashed potatoes.

Oscar included in his book a fairly simple receipt for stuffed bass would also make a stunning presentation.  A stuffing made from bread crumbs, spices, eggs, butter, lemon, salt, pepper, and a little water was stuffed into the fish, the fish was sewn closed, and then artfully baked.  – Tschirky, Oscar.  The Cook Book by “Oscar” of the Waldorf.  1896.  Chicago.

When I was growing up, the only way we ever had fish was fried.  The writer mentioned earlier would have scolded us for turning out “abominable” fried fish that was cooked too long, but no amount of experience in the kitchen has changed my outlook on how long to fry it.  I still want it fried deep brown and crispy, with a squeeze of lemon and a slathering of tartar sauce.  I like the idea of serving bacon with it because, after all, everything is better with bacon.  Until my next post, Blissful Meals, Yall & a Merry Christmas to all.