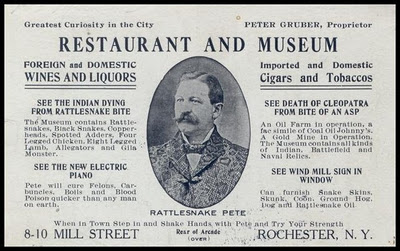 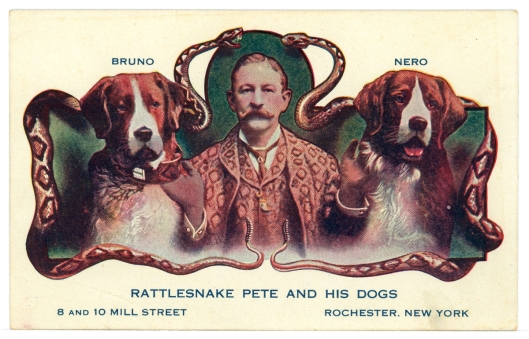 Peter Gruber was born in 1857 or ’58 in Oil City, PA and as a youngster learned about rattlesnakes from Native Americans who lived in the hills. As a young man he reluctantly entered the restaurant and saloon business with his father where he remained until Oil City was devastated by a flood and subsequent fire on June 5th. Peter removed himself and along with his reputation for housing poisonous snakes in 1893 went to Pittsburgh, but remained there only a short time when the city officials refused to grant him a business license to operate a saloon in which he kept snakes.

Apparently Rochester, NY wasn’t as particular about housing reptiles as Pete established himself there where he operated his business for some years with his serpent friends, despite being bitten by rattlesnakes 29 times and four times by copperheads. He operated the museum until 1931 and on Oct. 11, 1932 died at his home at the age of 75. He died not from snake bite as one might suspect, but from cardio-renal syndrome complicated by chronic nephritis, chronic endocarditis with lesions of the mitral and aortic valves, and arteriosclerosis. Following a burial mass at St. Mary’s Church he was buried in Holy Sepulcher Cemetery.

In 1901, Peter Gruber, known as Rattlesnake Pete, presided over a rather unique dinner given in honor of a fellow snake handler from Colorado who had previously hosted Pete in his home. The dinner took place in New York. “He first intended to pay a little compliment to his friend with a specially prepared dinner of rattlesnake, served in various toothsome ways, but becoming more and more enthusiastic over the idea, he enlarged the scope of the menu, adding watersnake stew, boiled python with egg sauce, and as the piéce de résistance served a large platter of roast boa-constrictor.”

Eighteen guests were present. The dinner was served in Pete’s den, “an odd little room off his place of business, for Pete, in the hours he can spare from playing with his pets, runs a saloon and restaurant, a quiet pleasant place. Only a favoured few are allowed to pass the door of the sanctum sanctorum where the snakes, sometimes more than a dozen, sometimes several score, live, watched over by their proud owner. The table decorations were striking and appropriate. A big rattler, caged in glass, served as a centerpiece, and stuffed reptiles in various attitudes took the place of the usual sprays of fern and smilax. The foot of the table was presided over by a huge cobra, stuffed of course, and around each plate were two or three diminutive black snakes, all alive. The walls of the room kept their everyday hangings of snake skins, rattlers’ rattles, canes made from wrigglers’ skins and many other curios.” Pete’s coat made entirely of rattlesnake skins was probably displayed there as well.

While your author would flatly refuse to eat dinner with a black snake crawling around the plate, apparently the eighteen guests enjoyed the food and the experience. “The ordinary guests proved rather nervous at first and made half-hearted motions with their spoons, but the two experts soon inspired them with more enthusiasm [to eat the watersnake stew].”

Some guests compared the stew to fish chowder, frogs’ legs, or eel, but when asked for the recipe the host refrained from offering it. The rattlesnake was thought similar to chicken or veal, but most guests claimed their hunger quite satiated before the python with egg sauce and roast boa constrictor were served.

The guest of honor took the caged rattler from its glass-walled den, wrapped it about himself quite playfully, and discussed the habits of the rattlesnake with his fellow guests who did not share his enthusiasm. When one of the attendees doubted the snake was capable of inflicting harm, the gentleman pried its jaws apart with a pen-knife whereupon drops of venom dripped from its fangs onto the knife blade.

In departing from the dinner, those present, “complimented its originator upon the success of his novel scheme”. They were far more polite than I in their appreciation of the strange goings-on much as were the many tourists who took a brief respite from the trains to rush to Pete’s establishment over the years. –

Source: The Strand Magazine. Nov. 1901. Various issues of the “Rochester Democrat and Chronicle”. Stilson, Charles B. “The Biography of Rattlesnake Pete”. 1923. Postcard images.