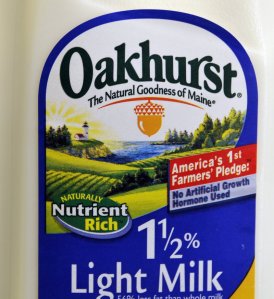 Have you ever considered there could be anything other than fresh natural milk in the milk product you offer your children?

In 1994 artificial growth hormones made their way into our milk supply and with the exception of some organic milk hormone-laced milk became pretty much standard within 2 or 3 years.  How can this be and more importantly WHY?

It seems that cows injected with recombinant bovine somatropine (rBST) and recombinant bovine growth hormone (rBGH) tend to produce approximately one gallon per day more milk than cows not treated with it – at least for a while.  If we were a starving third world nation boosting quantity might take precedence over health concerns but as we’ll see, using it seems to benefit only one faction – the company that produces the hormones.

First, from a farmer’s perspective, a little research shows that the hormones aren’t good for the cows and they certainly aren’t good for people.  Cows have more problems with cystic ovaries and uterine disorders, lower birth weight and shorter periods of gestation, and a greater risk of clinical mastitis (an udder infection) that requires antibiotics.

What does such an inflammation mean for our milk supply?  “The most obvious symptoms of clinical mastitis are abnormalities in:  The udder such as swelling, heat, hardness, redness, or pain; and the milk such as a watery appearance, flakes, clots, or pus”.  Yum.

Treated cows may begin to have reduced milk yield, increased body temperature, lack of appetite, sunken eyes, diarrhea and dehydration, and reduction in mobility due to pain in the udder or lethargy.  The UK study from which this information came says also that while the overall protein content in the milk may be unaffected, changes in the types of protein present may be affected by the leaching of low-quality blood serum proteins into the milk.  Casein, an important protein, can be significantly reduced and casein is closely linked to calcium levels in the milk.

Milk with pus in it sure sounds tasty on my cereal or in the ice cream we go through by the gallon.  Think it doesn’t make it into your Turtle Tracks?  Then why did Breyer’s Ice Cream recently announce that it is going to stop making ice cream from milk impregnated with growth hormones due to consumer demand?

Canada, the European Union (some 27 countries), Japan, Australia, and New Zealand have had bans in place on rBGH, yet the U.S. has no restrictions and Monsanto, the producer of the hormones, filed a lawsuit against a dairy that advertised their milk contained no growth hormones. It seems pointing out that a brand of milk comes from hormone-free cows causes consumers to wonder what is in other brands then start to wonder how consumption of it affects them.

The potential for health endangerment from these dairy products varies greatly from one source to another, and like many situations it comes down to the consumer making an educated decision on whether or not they’re willing to chance it.

The www.cancer.org website downplays the risk of increased Insulin-like Growth Factor 1 (IGF-1) levels in milk produced by cows that have received growth hormone but concludes its report with, “The evidence for potential harm to humans is inconclusive.”  They also conclude that the increased use of antibiotics necessary to clear up rBGH induced mastitis in cows does promote the development of antibiotic-resistant bacteria, but the extent of harm in humans is unclear.  Really?  We’re being told not to over-use antibiotics because it may have the same affect, but it’s OK to pass on antibiotics to our children through the milk they drink?

What is IGF-1?  “An elevated content of IGF-1 has been suggested to have adverse implications for human health and cancer frequency”.

Milk from rBGH-treated cows does have much higher levels of IGF-1 according to www.responsibletechnology.org, and puts consumers at, “a high risk factor for breast, prostate, colon, lung, and other cancers.”  They feel that levels of IGF-1 can be up to 10% higher than in milk from un-treated cows.  Their studies indicated that milk from rBGH-treated cows with increased IGF-1 levels may increase the rate of fraternal twin births in humans.  In the U.S. the number of fraternal twins was said to have grown at twice the rate as the UK where rBGH is banned.

Is the danger being downplayed for economic reasons?  The Responsible Technology website, notes that after being sued by Monsanto in 2003 Maine’s Oakhurst Dairy’s farmers’ pledge, “No Artificial Growth Hormones”, had a sentence appended which stated that according to the FDA no significant difference has been shown between milk derived from treated and untreated cows.

Responsible Technology says the studies showed milk from treated cows did contain increased IGF-1 levels and, “higher amounts of pus and antibiotic residues”, and claim further that the additional wording added to the Oakhurst label was written by the FDA’s deputy commissioner of policy, Michael Taylor, previously Monsanto’s outside attorney who, after running policy at the FDA, became vice president of Monsanto.

How do these situations come about?  Perhaps because consumers have been too complacent and let big business decide what goes into our food.  Doesn’t some agency control the safety of food additives?  Let’s look at both sides of that coin.

Oct. 25, 1998, Phil Angell, Director of Corporate Communications for Monsanto was quoted by the New York Times Magazine saying, “Monsanto should not have to vouchsafe the safety of biotech food…Our interest is in selling as much of it as possible.  Assuring its safety is the FDA’s job”.  The FDA, however, issued this statement, Federal Register, Vol. 57, No. 104 (1992):  “Ultimately, it is the food producer who is responsible for assuring safety”.  It would appear that no one is on watch.

Concerned consumers should definitely read the entire Responsibility Technology report for themselves found at http://www.responsibletechnology.org/gmo-dangers/gm-hormones-in-dairy.  Be sure to follow the links to fact sheets on rBGH, and to reports from such credible sources as the Oregon Chapter of Physicians for Social Responsibility.

Stores carrying these brands can be found online but well-known ones include Trader Joe’s, Whole Foods, Walmart, Sam’s Club, Costco, Albertson’s, etc.  Most stores carry Lactaid brand.  Be aware that while a brand of milk may be hormone-free, other products bearing the same brand name such as butter, ice cream, cheese, or yogurt may not be, as in the case of Tillamook.