In the weeks leading up to Christmas I posted several articles about 18th century Christmas Dinners and what I planned to make for ours, and I am happy to say the meal was enjoyed very much.  Martin’s only complaint was that there weren’t family and friends here to enjoy it with us. 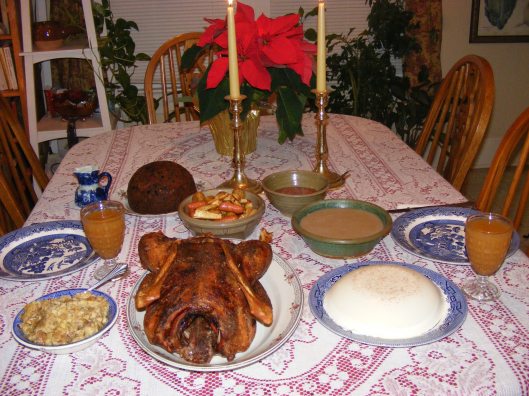 The only mistake I seem to have made in preparing this meal was in letting time slip away and getting the goose started a little later than I meant to.  Dinner ended up being served at 7 instead of 6, but Martin said it was more than worth the wait.

The old cookery books insisted that roast goose be served with applesauce, and for a historic foodie the jarred stuff wouldn’t cut it, not on Christmas.  I used Macintosh and Granny Smith apples – a two to one ratio of Macintosh to the Granny Smith – a half cup of sugar, and a half teaspoon of cinnamon.  I cannot tell you how Heavenly this house smelled while that was cooking.

The goose was seasoned with a home-made rub, and yes it is made of period correct ingredients and is based on a period blend.  The saltiness of the rub and the sweet-tart flavor of the applesauce was perfect together.  It was very easy to see why our 18th century counterparts felt so strongly that the two be served together.

My stuffing was made from cornbread, celery, sage, mushrooms, and fresh chestnuts with heavy cream and stock from the goose giblets.  Martin made gravy to serve with that and as usual did an unbelievable job.  Once I had his, I haven’t made gravy since.

The blancmange was perhaps the most delicate thing I’ve ever eaten and the subtle almond flavor was wonderful.  It was like eating a cloud it was so light, yet had just the perfect body for unmolding.  It was definitely something that will be on our table often.

The roasted root vegetables were made with some of the fat from the goose, and since goose is by nature fatty, there was thankfully quite a bit of it to save and use on other special occasions.  Goose fat is divine for seasoning and for cooking and the carrots, baby potatoes, and parsnips benefitted immensely from their dip in the goose fat pool.

Finally, how can you have an 18th century Christmas dinner without plum pudding?  It was absolutely delicious, especially with the orange sauce I made to go with it.  I used a dozen or so period receipts and chose the best parts from each one to make this pudding, and you can bet the farm I’ll be writing down exactly what went into it so that I can make it again as close to the original as possible.

I would say Merry Christmas to all, but Christmas has come and gone and won’t be around again until next year, so instead, I’ll say, Blissful Meals, Yall, and hope I’ve encouraged you to try something special very soon.