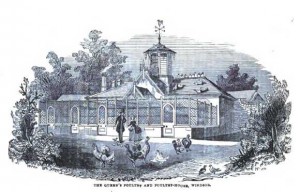 “Her Majesty’s poultry-yard, at Windsor, is situated in a small pleasure-garden just opposite Frogmore, and being rather for the amusement of rearing fancy fowls and pigeons in the manner of an aviary, than for breeding them for the table, is only, at present, upon a moderate scale.  The hen-house is erected at the back of a high wall, and…is merely a simple, though fancifully-decorated cottage, displaying considerable taste in the architect.  Over the roof is a well-stocked hexagonal erection for pigeons of various race, which are so familiar as to perch upon the person of her Majesty, who feeds them from her hand; in the centre of the building is a small room of entrance, on each side of which are the several compartments for the poultry, with a yard divided into separate courts by wire fences, and no birds can have more snug retreats for depositing and sitting upon their eggs—the nests being tastefully formed of moss, giving them the appearance of bowers; the whole warmed by a heated flue running underneath, and communicating with each cote by gratings.

Here may be seen a curious collection of white Java Bantams, odd little birds, covered with a sort of hairy feather, but laying, it is said, the richest kind of egg; which, however, are not a little difficult to be got, for it seems that no sooner is one layed, [sic]than the whole tribe, even the hen herself, begin pecking at it until eaten up:  yet in this, we imagine, there must be some mistake, or it would be impossible to rear a brood from the parent hen.  There are also some of Sir John Sebright’s celebrated bantams, with their golden speckled feathers, and other small breeds of a rare description.  By way of contrast, there is an enormously large breed of Cochin China fowls, the cock, although very young, weighing upwards of ten pounds, and the hens very prolific of eggs of superior flavor; which, although white when layed, [sic] soon become afterwards speckled.

There are likewise various other sorts of fancy breeds—both fowls and pigeons, of a curious description—all under the care of a man especially qualified for such a charge, as perhaps there are few better acquainted with the habits of the feathered tribes.  He has evidently passed much of his time in the recesses of the woods and forests, trapping birds for sale, and examining their modes of life…

The shrubberies in the garden afford shade enough from the sun, but the fowls should also have shelter from the rain, by a verandah extending along the front from each side of the porch…

We understand it to be the intention of her Majesty to establish a large poultry-yard, for the supply of the royal table, in the breeding and fattening of all sorts of fowls—in the care of which her Majesty takes especial interest; nor can there be a doubt that the introduction of foreign breeds will thus—under the example of her gracious patronage—in the course of time, cause much improvement in the stock of our native species…”

The author went on to extol the virtues of exercise citing the royal couple as an example.  “Those residents of Windsor who are in the habit of taking an early morning walk, to enjoy ‘the cool, the fragrant, and the silent hour,’ in the splendid demesne, proudly crowned by its ancient castle, must have often seen two persons in plain attire, tripping lightly across that pleasant meadow called ‘Datchet Mead,’ in order to visit a farm at the extremity of the Home-park.  These persons are Her Majesty and Prince Albert, pursuing their way to the dairy and poultry-yard, and in their progress sporting with their infants…It is impossible to witness the unaffected enjoyment of the royal couple in this domestic excursion, unalloyed as it is by any restraint of official etiquette…” 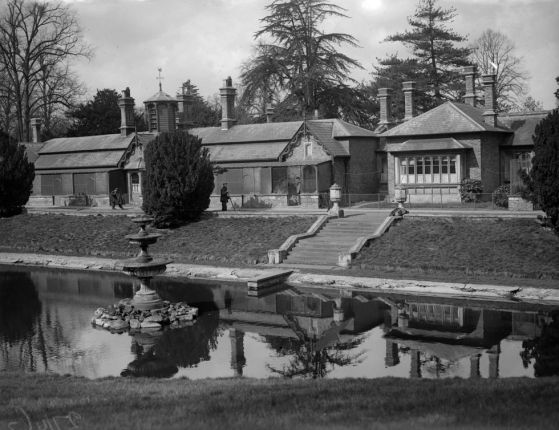 This is an opinion article from Appalachian Magazine, written by Jeremy Farley:

This week, our nation celebrated its 240th birthday and though my heart fills with patriotic fervor each time I catch a glimpse of those red stripes flapping in the wind, I can’t help but have those feelings checked by the harsh understanding that America 2016 is a nation in dire trouble.

Far from being the land of the free and the home of the brave, we are now a nation of spineless weaklings ready to be offended at the drop of the hat and often it is the very ones who dropped the hat who are the most offended.

I do not pretend to be an expert on sociology or American history – everything I know I had to learn from my life’s experiences, mostly as a child on a +200-acre beef farm in nowhere Virginia.  The older I get, the more I have come to realize, however, that it was here that I received the type of education no Ivy League institution can come close to offering.  My only regret is that 200 million other American children never had the same opportunities I enjoyed – opportunities to bottle feed a baby calf, drive a truck through an empty field at the age of 5 (alone), spend summers sitting alongside my father inside the cab of a John Deere tractor, begin Christmas morning the same way I began everything other cold and windy winter morning – opening the gates for dad as he unrolled hay for hundreds of hungry animals.

And though American agriculture is more productive than ever, I’m afraid that as a nation we are beginning to witness the consequences of having raised multiple generations who have never looped a metal chain through a gate or chased lightning bugs through a field of freshly mowed hay.

As a nation, we have allowed Disney to convince our children that all animals are cute and cuddly, then wonder why dozens of people get killed each year attempting to take selfies with grizzly bears, cougars and copperheads.

As a nation, we have replaced the garden hoe and watering bucket with an Xbox and cell phone, then wonder why our “children” refuse to move out at the age of 30.

As a nation, the vast majority of our families have never even came across an injured bird, let alone taken the time to nurse one back to health, then we wonder why a generation has been brought up to have no respect for nature or its Creator.

While our forebears were busy praying for rain, we have come to regard the water that falls from the sky as being a cursed object — unaware that it is the rain that keeps us fed each day… All sunshine and no rain makes a barren desert, but hardly anyone realizes this in 2016 America; which is why so many never find peace during their darkest days.

There was a time when Americans consumed bacon, sausage, biscuits, gravy, fried eggs and a big glass of milk each morning — and yet they rarely got fat.  Why? Because after eating such a hardy breakfast, they went out in the fields and spent the next thirteen hours fixing fences, hanging gates, delivering calves, killing, yes, killing predators, and harvesting food.

Farm work is dirty, tiring, sometimes cruel and always difficult; which is exactly why the percentage of Americans who engage in this work has declined with every generation.

Yet, it was this type of upbringing that allowed a nation to produce men and women who pulled together to fend off the forces of Hell in the Second World War, explore the heavens, eradicate disease and tap the ocean depths.

Sadly, those farm children are dying off the scene each day. They have been replaced by “men” who have never gotten dirt under their fingernails and purchase overpriced coffee as a status symbol.

I’m not so foolish to believe that all of our ills could be solved by a trip back to the farm, but I am confident that if a few more people had the type of upbringing I enjoyed, the world would have a lot more common sense!

“Men In Denim Built Our Country…Men In Suits Destroyed It.”