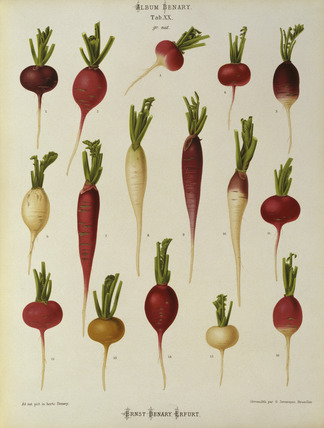 While not native to North America, radishes were prevalent in the gardens and diets of Colonial Americans as proven by such notable men as William Bradford and William Wood.  The latter resided in the Massachusetts Bay Colony between 1629 and 1633.  They were found in John Randolph’s “Treatise on Gardening” written about 1765 in Williamsburg.  “There are Radishes known in this country by the name of Scarlet or Salmon, London short topped, &c.”.

Not all radishes are alike, however.  If you want radishes throughout most of the year, especially if you live where temperatures soar in summer, shop for seeds meant to grow during different seasons of the year.  After researching this topic I realized why I remembered long white icicle radishes from my childhood – simply put, they grew during summer when spring radishes would not.

Seed varieties are not often designated as spring or winter in their descriptions and most people are unaware there is a difference.  Research is a slow and tedious endeavor so hopefully sharing mine will help others with choosing varieties better suited to their needs.

Vilmorin made the distinction in 1885 and documented some 43 varieties grown for roots, and the rat-tailed and Madras grown for the pods.

While not infallible, a general rule is spring radishes come in a variety of pretty colors ranging from red, pink, white or purple, and in different  shapes while winter varieties tend to be longer icicle or round shape and white, white and green, cream, or black in color.

Let’s talk about eating radishes.  The fleshy root is not the only edible part and those weren’t always confined to the salad bowl.  Breakfast radishes were so named due to the prevalence with which they were consumed for the morning meal.  “…the mother and son were together in the dining-room, where they were breakfasting with a cup of coffee, with bread and butter and radishes”.  – “An Old Maid”.  1898.

The greens can be sautéed, cooked with other greens, young leaves can be substituted for lettuce on a sandwich, or leaves add great flavor to soups and stews.  The greens are delicious and why throw away something so tasty and chock full of goodness?

Don’t forget radish sprouts for your salad or sandwich and wash the garden thinnings for salads.  I harvest some of the greens from the radishes for cooking and they grow back more luxuriant than before, but take only part of the leaves from each plant.

The root can be pickled or roasted just like a potato.  It can be sliced or cut into matchsticks, depending on size, and dressed as a salad.

The flowers are edible and can really make a nice presentation in salads, sandwiches, dips, etc.  If you fail to harvest the flowers, don’t worry, they will form seed pods which are also edible.  The seed pods can be added to salads, cooked, or pickled.

There are varieties, such as Rat’s Tail and Madras Podding that are grown purely for the seed pods.  The latter is supposedly more heat tolerant although I haven’t grown it and can’t say.  “The newly-introduced radish, which has attracted the attention of horticulturists so much of late, is certainly a novelty, inasmuch as the edible portion of the plant is the seed-vessel, and not the root”.  – “Nature and Art”.  June 1, 1856.

Let’s not forget that horse-radish is, indeed, a form of radish as well and there are those who would scoff at the idea of roast beef without it.

There are mild and hot variances in spring and winter radishes and since the length of this article will not permit me to describe the flavor of each one individually I suggest readers peruse the seed catalogs of recommended vendors at the end of this piece.

Before we can eat, we must plant and radishes require a little more thought than I once realized.  Plant for the season and temperature and don’t just try to plant the same variety all year.

Radish culture a century ago was little different than today, plant summer crops in a shaded location [in temperature extremes this probably won’t help], frequent watering in dry weather to keep them from getting pithy, and small successive plantings are preferable to large beds.

Spring radishes grow and produce rapidly and last only a very short time.  They like cool weather and do not tolerate heat well, quickly become pithy when over-large, and do not keep well in storage.  Plant early when the ground can be worked in the spring.  Cherry Belle is a well-known spring radish.  Others include Cherry Bomb, Celesta, Rover, April Cross, Champion, Red King, Snow Belle, French Breakfast, Gala, White Hailstone, Purple Plum, Bora King, and Crimson Giant.

Summer radishes aren’t so much a type as they are an in-between mixture of spring and winter radishes.  They may tolerate more heat than spring radishes but won’t last through a long hot summer.

A few varieties are marketed as heat tolerant and suitable for multiple seasons although one would have to experiment to know how accurate the description is.

White Icicle is commonly known and produces in summer as will the Chinese Pink.  The Red Meat or “Watermelon” radish is recommended for summer to fall sowing only.  Alpine, a popular Korean variety, KN-Bravo, Nero Tondo, Roxanne, Shunkyo Semi-Long, Summer Cross (icicle), Crunchy Royale, etc. are sold for spring to summer planting.

Its easy to see why its called “Watermelon” radish

Winter radishes are planted in late summer through early fall and mature before winter freezes come.  In warm climates successive plantings will see you through the winter with fresh radishes.  These hold in the ground better than spring radishes and can be left to harvest as they are wanted.  When a freeze is forecast, pull them up, cut off the greens, and store the roots in the refrigerator or a cool basement.

A winter variety I fully intend to try planting this fall is Schifferstadt Long Black, a standard of the Pennsylvania Dutch.  My husband’s family is PA Dutch so we grow some PA Dutch vegetables on our little homestead and make historic dishes from that area.  I suspect this variety is from William Woys Weaver’s Roughwood Seed Collection sold through Baker Creek Seeds.

John Randolph made the distinction of winter radishes in Colonial America.  “The black Radish will continue if sown in August, until killed by the frosts, and Radishes may be preserved in sand as carrots are in the spring”.

“Winter radishes may be simply pared, cut in quarters, and arranged neatly on a pretty shallow dish.  Red radishes of the spring should have the roots neatly trimmed, half the top cut and trimmed, leaving little holders at the top.  These may be arranged neatly in a glass dish and served with cracked ice.”  – “How to Cook Vegetables”.  1892.

I hope this helps in choosing varieties for your garden.  The research was part of my on-going search for plants best suited to my long very hot summers.  I leave you with wishes for a good harvest and Blissful Meals.© Copyright.