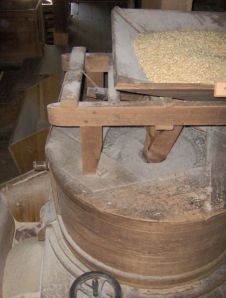 The Victorians continued the search for tasty ways to use maize and offering cash rewards for the best dishes made of corn meal was incentive enough for some of America’s best cooks to tweak a favorite recipe or create an altogether new one. The following account shows the enthusiasm garnered by such events.

“In order to call out information upon the best methods of cooking Indian corn meal, we proposed, in the December Agriculturist to have an exhibition of corn bread and corn cake, at our office on December 14th. Premiums of ten dollars, five dollars, and two dollars were offered for the best, second best, and third best loaves of bread, consisting mainly of corn meal; also an extra premium of four dollars for the best loaf of cake of any kind in which corn meal should be the chief ingredient…

The entries reached over two hundred (two hundred and nineteen). Several entries being for duplicated loaves, the entire number of specimens reached some two hundred and fifty! As will be seen below, these came from the distant West, from the Middle States, as far South as Maryland, and from the North and East. A space of seventy-four feet of wide table-room was closely filled with a most imposing display of loaves of all sizes, from nearly half a bushel down to patty-pan corn meal biscuits, and small corn-meal crackers—and not bad crackers either. There were pure corn-meal loaves, and loaves of ‘rye and Indian;’ loaves one part wheat or rye flour with three parts corn meal, and loaves apparently half meal and half flour, with loaves of every intermediate combination. There were pumpkin loaves, corn-meal dodgers, corn-meal pound cake, corn-meal pone, corn-meal crullers, corn-meal ‘nut-cakes,’ corn-meal baked puddings, and corn-meal whatnots. There were round loaves, square loaves, high loaves, and flat loaves—in short, loaves of every conceivable form and shape, for of the two hundred and fifty-odd specimens scarcely two were alike in form and mode of making. The sight was one to gladden not only the hungry, but to cheer the heart of every patriot, when he remembers that corn is our native cereal, that it grows everywhere and in abundance…” – Enfield, Edward. Indian Corn; its Value, Culture, and Uses. 1866. NY.

My next kitchen adventure is to produce these crackers. They are probably very similar to the ones submitted for judging in the New York event.

“Sift together one and a half pints of flour, a half pint of cornstarch, a half teaspoon of salt, a tablespoon of sugar, and a teaspoon of baking powder. Rub in a tablespoon of lard, add a half pint of milk, and mix to a smooth dough. Flour the molding board, turn out the dough, knead it lightly until perfectly smooth, set aside covered for ten minutes, then roll it out very thin, cut in rounds, and prick them with a sharp fork. Lay upon buttered shallow tins, wash over with milk, and bake seven or eight minutes. Store in a tin box in a dry place until used. Sprinkled with grated cheese and heated in the oven the crackers are good to use with the salad course.” – Murphy, Charles Joseph. © 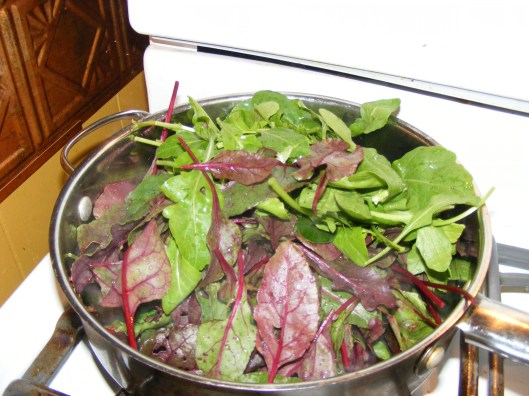 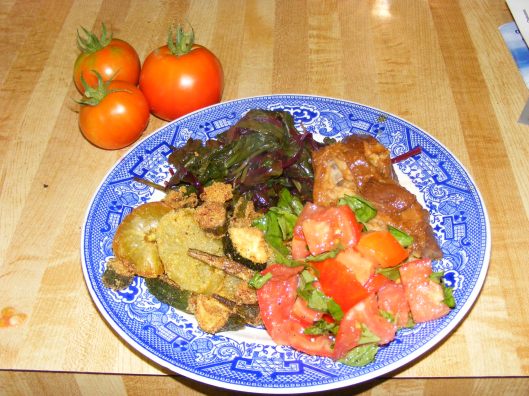 My grandmother, bless her sainted heart, would have said it is rude to tell someone how good my dinner was and not offer them some. I agree and share with my readers, not the prepared meal, but the enthusiasm for preparing and eating it which will hopefully inspire others to venture out of their comfort zone.

Arugula and beet greens picked and put directly into the pan to steam with a little garlic, salt, and pepper, and just a splash of my home-made apple cider vinegar at the end paired well with a dish of cornmeal battered green tomatoes, okra, and zucchini. Left-over BBQ ribs and some diced tomatoes with coarsely chopped basil from my garden was perfect with just a little salt and pepper and a dribble of olive oil and vinegar. I’m hardly a photographer so let me say the pictures do not do the meal justice.

Blissful Meals yall, enjoy some garden bounty – if not from your own garden then fresh from the farmer’s market.